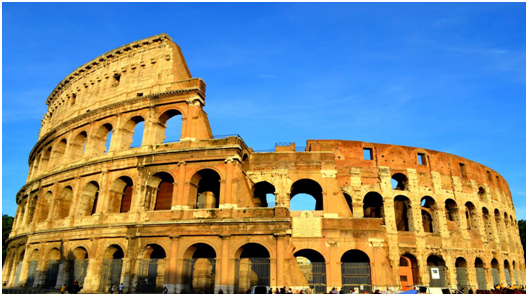 Colosseum, formerly known as Amphitheatrum Flavium, is the place where the Roman Empire was dedicated to slave owners, nobles and free men watching the fighting or slave fights. It was given this name for the Emperors of the Flavian dynasty. It was first opened to the public in A.D. 80 with the intent of calming the unrest of the unemployed and to make the Flavian dynasty more popular. It was also a way of showcasing the Roman’s superior engineering abilities and Roman power. It is six acres in area and could hold approximately 50,000 Roman spectators. It was used for gladiator fights, theatrical performances, executions, religious plays, and animal displays. Built in 72-80 years, it is a symbol of ancient Roman civilization. The site is located in the heart of the Italian capital, Rome, on the south side of Piazza Venezia, near the ancient Roman market. In appearance, it is a perfect circle; when overlooking, it is oval. It covers an area of about 20,000 square meters, with a long shaft length of about 188 meters, a short shaft length of about 156 meters, a circumference of about 527 meters, and a wall height of about 57 meters. This huge building can accommodate nearly 90,000 people. Audience.