“In fact, the athlete’s career for more than ten years, only one less a title of a champion, that is perfect. In fact, you have a moment that belong to your own moment, it is already perfect.”

The Asian Games gold medal can be regarded as the best award for Su Bingtian’s hard work and sacrifice for so many years. “I feel that I have broken my curse today.” After the game, Su Bingtian is still immersed in the flashlight of the game. “I participated in all sports games, whether it was the National Games or something, I did not get a championship, and This score is very valuable.”

9 seconds 92! After Su Bingtian’s continuous record creation, he still motivated his best in the challenge of his opponent. After this fierce final, Su Bingtian also hopes that more young athletes will take over as soon as possible. After all, competition in Asia is becoming increasingly hot. “Now the strength of sprints in Asia has improved, and everyone’s performance has increased to about 10 seconds. Not only the old athletes work hard, but the young players have to keep up, because I can’t run for many more years.” 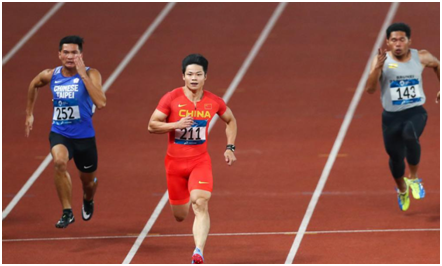 After all, from March to the present, Su Bingtian’s results are too eye-catching –the 60-meter final of the Birmingham Indoor Athletics World Championships, which had an Asian record of 6 seconds 42; then in Madrid and Paris, Su Bingtian won again in the 100-meter race. He reached the Asian record of 9 seconds 91. So that everyone cares more about when Su Bingtian refreshes his achievements again and creates a record of his own Asian 100 meters for the yellow race. However, Su Bingtian, who has a variety of auras and glory, has never stood on the highest podium of the Asian Games personal project.

On the stage where the spotlights are intertwined, almost everyone sees the brilliant side of Su Bingtian; few people really notice his hard work behind these honors. According to a reporter who has followed Su Bingtian for a long time, in Madrid, when Su Bingtian first created a score of 9 seconds 91, he just took the flowers prepared by the organizer on the side of the runway and then kept the railings retching. . “It is really not easy to maintain a high level of athletics at my age, so I am very grateful for each of my small improvements.” Su Bingtian said that he was familiar with the reporters after a slight adjustment. For competition and training, he actively treats and maintains high quality training.

Su Bingtian has maintained a relatively healthy state for so many years of professional career, but some minor injuries will also bother him. He used to be in the “bottleneck” because of the state ups and downs, and even had the idea of retiring. He overcomes difficulties constantly. “As an old player, I am looking forward to the newcomer to keep up, I will continue to run.” Su Bingtian said more than once in public, “It is possible to create better results by grasping a better self.”