The Culture of the Eiffel Tower(I)

Home ⁄ History and culture ⁄ The Culture of the Eiffel Tower(I)

The Culture of the Eiffel Tower(I)

Eiffel Tower, stands on the south side of the Seine River in the Champ-de Mars in Paris, France. It was built in 1889. After the completion of the year, the Eiffel Tower was once the tallest building in the world. It is one of the world’s most famous buildings, it was called as one of the symbols of French culture, one of the landmarks of Paris, and the tallest building in Paris. It was loved by the French as “Iron Lady”.

The Eiffel Tower is 300 meters high, the antenna is 24 meters high and the total height is 324 meters. The tower is made up of many scattered steel components–it looks like a bunch of model components. There are 18038 steel members, weighing 10,000 tons. A total of 7 million holes were drilled during construction, 12,000 metal parts and 2.5 million rivets were used. In addition to the four feet are made of reinforced concrete, the whole body is made of steel, sharing 7300 tons of wrought iron. The tower is divided into three floors, 57.6 meters, 115.7 meters and 276.1 meters respectively away from the ground. There are restaurants on the first and second floors, and a viewing deck on the third floor. There are 1711 steps from the bottom of the tower to the top of the tower. 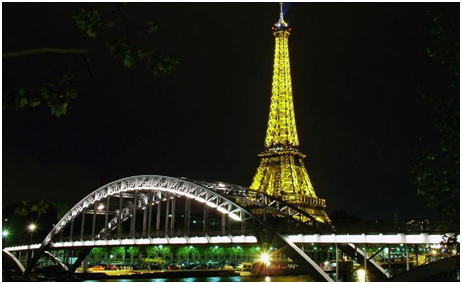 In 1889, the 100th anniversary of the French Revolution outbreaking, the French hoped that the opportunity to host the World Expo would leave a deep impression on the world. Especially after the unprecedented success of the World Expo in London in 1851, Paris was not far behind. The French have always wanted to build an exposition building that exceeds the British ”Crystal Palace”. In 1886, the design competition collection program was held with the aim of ”creating a work that symbolizes the technological achievements of the 19th century”. In 1885, the French official began planning to hold a Great Exposition in 1889 to celebrate the 100th anniversary of the French Revolution. They hope to build a monument that can represent the honor of France.

At that time, the stone Washington Monument was just completed. This 557-foot monument became the tallest building in the world at the time. The French hope to surpass this record and build a 1,000-foot tower in the heart of Paris. All that needs to be done is to find the design and architect of this tower.