Wonders of the Ancient World(I)

Wonders of the Ancient World(I)

The hanging garden is a garden built by the Nebuchadnezzar II, the King of New Babylon in the 6th century BC for his concubine, on the west side of Gate in the north of New Babylon. According to the Greek historian Diodorus, the park is covered with arched buildings at different heights. The terraces are planted with various trees and flowers, and they look like hanging in the air at a distance. The park is known as one of the Seven Wonders of the World, but now it is nonexistent.

The total width of the hanging garden is more than 500 meters. It is built on a high platform using a three-dimensional gardening method. The rockery is piled up with stone pillars and slate to up to the sky. Looking from afar, the garden is like in the sky. The rockery is divided into three layers, each of which is supported by a large stone pillar. In order to prevent water seepage, each floor is covered with a woven asphalt mat, two layers of bricks are placed on the mat, and a layer of lead is poured, and then fertile soil is planted on it, and many exotic flowers from exotic countries are planted. There is an irrigative water source and water pipes. 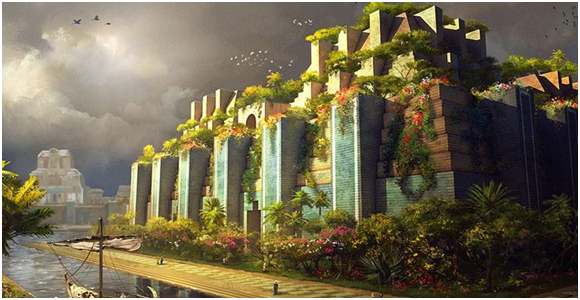 For thousands of years, there has been a beautiful legend about the “hanging garden”. The king of New Babylon, Nebuchadnezzar II, married the Princess, Amyitis. The princess is beautiful and has won the favor of the king. But for a long time, the princess started worried and got homesickness. Thus, Nebuchadnezzar II asked the craftsman to build a garden in his palace in accordance with the scenery of the mountains of Midi, which was covered with exotic flowers and plants, and opened up in the garden. The mountain path, next to the path is the turbulent water. The craftsmen also built a tower in the center of the garden, standing in the air, and the garden scenery finally won the princess’s favor.

Up to the 2nd century CE, when the Greek scholars comment on the famous buildings and sculptures, they listed the hanging garden as one of the world seven wonders. After that, ‘‘the hanging garden’’ is more famous in the world.

Regrettably, the “hanging garden”, like the other famous buildings of the Babylonian civilization, has long been submerged in the rolling yellow sand. We want to understand it, only through the historical records of descendants and modern archaeological excavations.